https://www.fool.com/investing/2018/12/21/3-growth-opportunities-for-activision-blizzard.aspx
Long term, Activision has plans to introduce in-game ads throughout its titles.

Kelazhur won "Best Athlete of other Genres" in Brazil. (IE of Esports)

Blizzard announced it is still working out details of SC 2019 Esports.  Both WCS Korea and the WCS Circuit will continue in 2019, and something new called "WCS Winter" replaces one WCS Circuit stop. Qualifiers run Jan 17, 18, and 20. This GSL style 10-week program of 2 online tournaments—one for the Americas and one for Europe— will culminate in a live, winner-advances battle between the top six, one for Europe and one for the Americas.

Patch 4.8.0 is out with numerous bug fixes and no nerf in sight for the Protoss.

Dota 2, Starcraft II, Tekken 7, Arena of Valor, and Mobile Legends confirmed as esports to be played in the SouthEast Asian Games in late 2019,  the first time that esports will be a medal event in a major sports competition.

SoulKey defeated Sharp to win Season 2 of KSL,  the Blizzard Starcraft ReMastered tournament. SoulKey had not won a Championship before.

Flash won't be playing in ASL  Season 7 due to his wrist injury. ((Flash is a Legendary player, Equivalent to a Michael Jordan )

Byun, the 2016 BlizzCon Champion who has suffered extreme wrist problems of his own this year, announced he is going to retire and depart for mandatory military service in January.

The National Championship Series, a nationwide series of in-person esports competitions Backed by Comcast and N3rd Street Gamers was announced. The season will feature Hundreds of regional tournaments and weekly training events including Overwatch, Hearthstone, and StarCraft II

Dota 2, Starcraft II, Tekken 7, Arena of Valor, and Mobile Legends confirmed as esports to be played in the South Asian Games 2019

https://www.foxsportsasia.com/esports/1003133/sea-games-2019-dota-2-starcraft-ii-tekken-7-arena-of-valor-and-mobile-legends-confirmed-as-esports-to-be-played-in-the-games/
The 2019 SEA Games will mark the first time that esports will be a medal event in a major sports competition.


This week, SoulKey defeated Sharp to win Season 2 of the Starcraft ReMastered tournament,  KSL. This is a Blizzard sponsored tournament along with the other SC BroodWar tournament the ASL.

SoulKey had not won before but has been getting farther and farther in the rankings every season so good for him.

No word yet on the new War Chest that is to be out in December. War Chests typically contain a new set of racial skins and a digital comic book to unlock by playing the game, either vs AI or players, and the first $1 million in proceeds goes towards prize pools for the major tournaments and other unknown related purposes.

Various Community organized tournaments are going on daily and weekly.


One of the bigger LANs Cheeseadelphia 8, just ended with an upset by Future, a 16 year old to keep an eye on for the future after defeating MaSa and #4 ranked in the world  SpeCiaL.

Most of those foreigners planning to make a GSL run in early 2019 are back in Korea or soon will be, at the ROOT - Unity House to practice their butts off.

GSL and WCS dates are not yet announced other than IEM Katovice but should be any time now.

The SSCAIT Starcraft AI tournament should start up again soon for season 7 once classes are back in session. The practice ladder is still dominated by SAIDA, the bot entry from Samsung Corporation. SAIDA won the internal Samsung competition to become their official entry over the autumn. FaceBook's bot, CherryPi, is hovering around 4th last I looked.

The Pylon Show On The Blizzard Launcher!

Starcraft This Week:  World Electronic Sports Games Qualifiers are ramping up at the national and Regional level, to compete in the Global Finals in China in March for a huge payout. Hearthstone, CS:GO and 3 other games will all compete there.

TESPA Collegiate Starcraft Tournament was won by printf, who broke into the top ranks just in time to qualify for the Finals and won a $7500 scholarship for his effort.

Cheeseadelphia 8 is finally here and MCanning knocked Neeb out of the tournament with a 3-2 victory over the favorite.

This week's guests, Nathanias, Rotterdam, Maynarde and Neuro! The last episode of the year. With beverages!

Warcraft III: Reforged reminds us why mod toolsets should matter 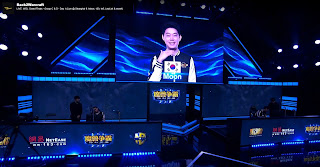 
SPOILERS: World of Warcraft is redefining undeath and rewriting a race

Sources for these news bits include: